To the members of Pheasants Forever/Northern Colorado Chapter:

This March marks two full years that K9 CASH has been assisting Colorado Parks and Wildlife with managing the diverse wildlife of our great state. Pheasants Forever sponsored CASH as he began his journey as a wildlife K9, by providing funds to cover portions of the K9 training costs. Support from Colorado sportsmen groups are critical in seeing programs like the CPW Wildlife K9 project succeed. I wanted to take a moment to highlight some of the job duties CASH has been able to work on this past year. Thanks again for your support!

CASH’s people friendly and outgoing personality has proven to be a great way to connect with a variety of groups to educate them on various wildlife management topics. When members of the public hear about a dog with a unique job, they are eager to learn more about the dog and its mission. Because of this, groups that are not traditionally interested in wildlife are showing an added curiosity when the topic of K9 CASH is thrown into the equation.

During CASH’s second year on the job, he helped to present over 20 wildlife related talks to groups ranging from 4H youth members, elementary school science fairs, public service clubs, and campers staying at Colorado State Parks. These presentations help to connect people with wildlife as well as educating them on key wildlife management topics such as why hunting is an important aspect of wildlife management.

In addition to the more traditional natural resource educational programs, CASH also made appearances on three Denver T.V. news stations, was the cover story on a nationally published magazine, a topic of discussion for Colorado Outdoors, and was detailed on a morning weekly radio show. These public outreach efforts highlighted the important work CASH is doing in managing and protecting wildlife. His unique story is helping to keep Colorado Parks and Wildlife’s mission relevant among the increasingly diverse population in the State.

In 2018, K9 CASH proved a valuable asset to wildlife officers by using his nose to assist with wildlife poaching investigations. He assisted with a wildlife check station near Craig, CO and also worked approximately 10 illegal hunting situations. A few of these cases include the following:

Aside from all the above mentioned duties, CASH also found some time to help a Spring turkey hunter. The hunter approached a wildlife officer in the field and said that they had shot a turkey on a nearby Ponderosa hillside. The turkey ran off over the hill out of sight. A few feathers and small droplets of blood were found but the hunter was unable to locate the bird after an extensive search. CASH used his nose to search the timbered hillside. After about 10 minutes, CASH proudly stood over the carcass of a deceased tom turkey. The hunter was extremely grateful and mentioned to the wildlife officer that he walked right by the turkey but was unable to see it. Fortunately for CASH, he relied on his nose rather than his eyes.

Without the support from Colorado sportsmen groups such as Pheasants Forever, the great successes of K9 CASH and the wildlife K9 program would not be possible. Thanks again for your commitment to preserving and improving Colorado’s sportsmen heritage. 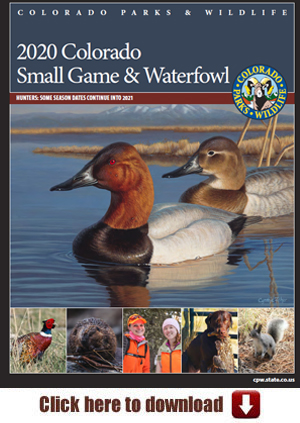